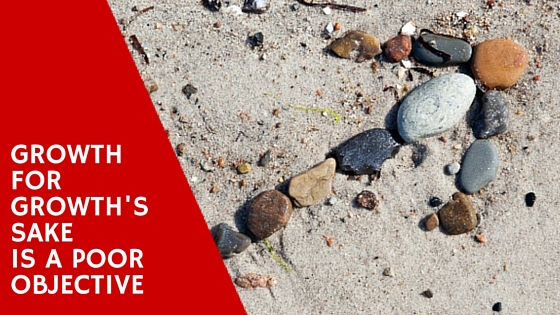 Take any business plan, financial statement, press conference, analyst presentation or the like â€“ What do they have in common?
About any business will proudly present its plans for growth.

Some are ambitious. Others are cautious. (The latter ones are often defended with reference to unfavorable economic conditions.)

Nevertheless, about every business projects a growth in sales or profits or market share or customer base or any other relevant metric. It is almost conventional strategic wisdom that growth is essential for corporate success. Grow or die is the motto.

Of course, there are several good reasons for a business to grow:

Besides that, there are some less favorable reasons for striving for growth. I am afraid these are the true drivers for ambitious plans in many cases.

At this point growing becomes dangerous. For many businesses, striving for growth has become a habit. However, growth for growthâ€™s sake is a poor objective. VW is currently struggling with the consequences of its aggressive growth strategy (becoming the worldâ€™s largest automaker).

I have learned that the ultimate goal of every business should be its long-term survival back in my first year of studies of business economics. This goal is to everybody’s advantage: shareholders, employees, customers, and the whole society.

Growth is a good objective if it is a necessary precondition for achieving this ultimate goal. If it is not, businesses should think twice why they want to grow.

Smaller businesses and niche players are showing how this can work: There are businesses that have found their optimal size. They operate on a level that enables them to generate sustainable profits. They avoid the negative side-effects that often come with growth efforts. Here is an example for a business that deliberately chose not to grow.

In addition to that, Iâ€™d like to provide some food for thought, why growth for growthâ€™s sake can be dangerous:

Larry E. Greiner has published his popular model of Five Phases of Growth as early as in 1972 (here is an updated version). He identified five crises that mark the transition from one phase to the next. There are countless examples of businesses that got into serious problems in one of these growth-related crises.

Jurgen Appelo has stated that â€œGrowth Is Not A Goalâ€ in a recent post at forbes.com. He recommends that businesses should strive to become the best, not the biggest. Growth would be a result and not an objective. He writes:

â€žIf the purpose of a company is merely growth, it is similar to cancer. Your business should try to be the best, not the biggest.â€

Irving Wladawsky-Berger has written another interesting post in which he compiles scientific facts regarding the growth of companies: Why People and Companies Die While Cities Keep Growing. In this post, he references research results from Dr. Geoffrey West.

â€žBut unlike cities, which produce more per capita as they grow bigger, companies scale sublinearly, becoming somewhat less efficient as they get bigger. Revenue per employee and profits as a percentage of sales also decreases systematically, – with the exception of outliers like Apple.â€

Many companies need to grow in order to stay in businesses. However:

[bctt tweet=”Growth should always be a means to an end, and not an end in itself.”]