Every business knows that search engine optimization (SEO) is important for its website. You can put all your offerings online â€“ if the major search engines do not like you, nobody will see them.

Last week I attended a presentation of latest survey results among journalists. What I learned there confirmed my assumption that you should not overemphasize traditional SEO. (Donâ€™t worry, I wonâ€™t elaborate on the importance of SEO any further. Thereâ€™s already been more than enough written about that.)

Here is what I learned:

News aktuell, a subsidiary of German press agency DPA, has conducted an in-depth survey among more than 1,200 German journalists. They asked them about how, when, and where they do their research. The name of the survey is Recherche 2016 (in German only).

At first sight, everything looked quite normal: the most important sources of information for journalists are still

Social media as an information source follows well behind with â€œonlyâ€ 52%. Well, the chit-chat about everything doesnâ€™t seem to be all that important, does it? However, a closer look at the figures revealed interesting insights:

58% of respondents state that social media has become more important for their research over the last year. And

Younger journalists are already making intensive use of social media. Only the age group of beyond 50 years is a reluctant user.

The chart is in German only, but you will get it. It shows which percentage of respondents within the age groups up to 35, 35-45, 45-50, beyond 50 uses social media as a source of information for their research. 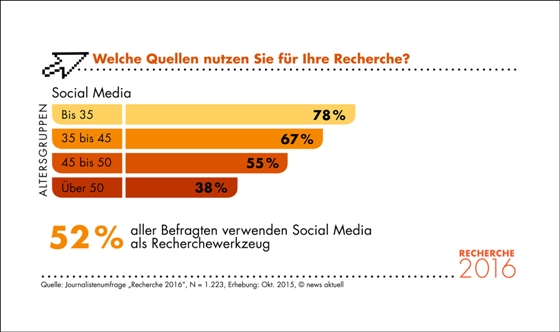 The following channels were mentioned as most important:

(all figures and images from Recherche 2016)

We can see that there is a generation of journalists, that uses social media almost as intensely as search engines.

That reminds me that YouTube is said to be the â€œsecond largest search engine of the worldâ€. It is especially popular for how-to-videos, tutorials, product explanations as well as talks and speeches for all sorts of topics (take the popular TED-Talks as an example).

Amazon is named as another important search engine. Their huge online shop offers an extremely wide choice of products, prices from several vendors, customer reviews and appropriate accessories all in one place. Why should I research a particular product on Google?

You may like this development or not. The fact remains, however, that it will not stop.

For the time being, younger generations are still heavier social media users than the older ones.

The younger ones wonâ€™t give up their habits as they grow older. Instead, we can expect overall social media usage rates to grow even further.

Hence, if you are thinking about how your offers can be found on the Internet, you shouldnâ€™t focus on the obvious search engines too much. Instead of tickling the last bit of SEO, might be better off investing your resources in a variety of channels.

[bctt tweet=”Instead of focusing on SEO too much, invest your resources in social media channels”]

Our book recommendations for businesses on social media