I just came across an interesting new project, called “European Smart Cities”. It is a ranking of European Cities with populations under 500,000, developed by Scientists from the Technical University (TU) of Vienna in cooperation with the University of Ljubljana and the TU of Delft.

Well, yes, this is one more city ranking and there already are plenty of them. However, I like the idea of a pan-European analysis with the focus solely on medium sized cities. Most cross-boarder city rankings only include the big metropolises and some more large cities. Smaller cities are mostly covered by national rankings. Thus, they are more difficult to compare for investors with an international investment focus.

As it says in the projectsâ€™s press release:

“Middle-sized cities are a fascinating focus group”, says smart cities project manager Univ.Prof. Dr. Rudolf Giffinger from the TU of Vienna. “120 million people, i.e. not quite 40 percent of all of Europeâ€™s city dwellers live in about 600 cities of that size. They have an enormous potential but are often in the shade of the big metropolises. It is difficult for them to position themselves, sometimes they have to fight image problems, and they are overlooked by investors. But they have a major advantage: Due to their size they are flexible and can pick up points with smartness”.

In my opinion, medium sized cities have great future potential â€“ if they are smart enough. Letâ€™s have a look at the factors, an investor or a company will consider when looking for a location for a new subsidiary, plant, research centre, service centre etc. They will not only need reasonably priced space, but also a suitable infrastructure, a sufficient supply of people with the right set of skills and a surrounding that makes the place worth of living for the kind of talent they want to attract. Big cities donâ€™t necessarily score high for these factors. Real estate prices are higher than in smaller cities â€“ not only for the investment itself but also housing prices for the people intended to work there. The typical traffic congestion of large cities may be another drawback. Hence, an attractive medium sized city might increasingly become the better choice for an investor looking for alternatives.

The European Smart Cities projects measures smartness as â€œforward-looking development in the six characteristics on the basis of a combination of local circumstances and activities carried out by politics, business, and the inhabitantsâ€œ The six characteristics are economy, people, governance, mobility, environment and living. The European Smart Cities website explains in more detail, which factors and indicators make up these six characteristics. Of course, it also provides the ranking of currently 70 European cities with detailed information how each city scores for each indicator, as demonstrated by this screenshot: 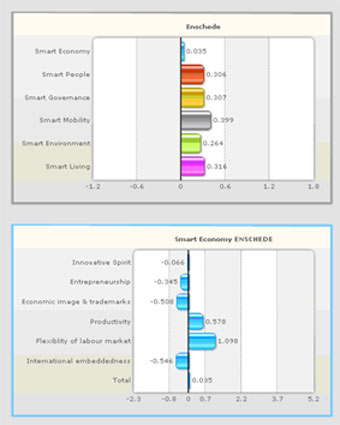