The subprime crisis of us-American mortgages (and its primary and secondary impacts on the financial system) has increased the pressure for mergers and acquisitions in the European financial services market. In particular in Germany major transactions are likely to occur: Postbank and Citibank are on Sale. Some Federal State banks (former Sachsen LB and West LB) have demonstrated their problems to manage risk related issues or did enter business segments outside their business model and faced financial losses. Daily news are full with ideas, recommendations and hypotheses which bank could or should be involved in M&A transactions. Everything seems to be fine, isn’t it?

The issue with all those concepts and recommendations is the performance of the new organization in the future. We have to have in mind that most large mergers and acquisitions have difficulties to achieve the expected synergies. Nearly a decade ago (01.1999) the Economist reported study results of mergers: Two of three M&A transactions did not work. In 2003 a study by Merrill Lynch reported that not only most mergers cannot deliver their promised value / return. Furthermore large transactions follow the trend to “perform worse compared to small transactions. ML found out that at least 50 % of important transactions (time frame since 1990) did reduce shareholder returns and hence organizational value. 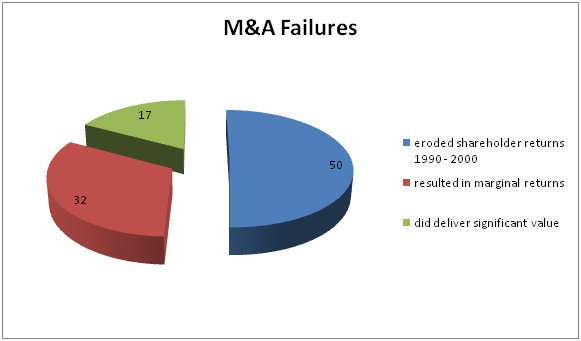 Having these results in mind I would argue that the new M&A transactions are star-crossed.

So what are the reasons in detail that so many mergers fail or destroy value? First and foremost during the M&A transaction most organizations have a strong internal focus (on the M&A success) and hence they are likely to lose something: customers, important people (key drivers) and sometimes market confidence. These losses “can” be combined with a number of different problems: hidden losses, uncontrolled costs, cultural barriers, different corporate values and power struggles among remaining managers.

Are there any solutions? Well, there are no guarantees available in general management, but of course there are some factors and attributes that might help your organization to achieve transaction success:

M&A in the Financial Service Industry can work. HSBC, Royal Bank of Scotland and Unicredit were quite successful in their transactions within the last two decades. Well established and smart executed acquisitions processes as well as sound strategic decisions (that fit to the strategic story) were the major factors to fulfill the deals objective.