In the field of strategy a lot of research and analysis has been undertaken in the last couple of years. Having this in mind I was looking for some research results which would indicate whether “things” have improved. Strategic planning and strategy execution were difficult issues in the past (I will write a separate blog post regarding this in the future). Unfortunately 2014’s status indicates that the problems and barriers are the same than a couple of years ago.

According to a Strategy& * survey of 501 executives (at companies around the world with revenues of $500 million to more than $10 billion) executives disclose their companies have significant shortcomings when it comes to developing and executing strategy.

Executives also say they struggle with the underlying strategies.

Indeed, in exploring companies’ strategy-execution gap, the survey found that nearly every executive â€“ 96% â€“ has concerns about at least one barrier to success, either on the strategic or the executional side. “The real challenge is not that companies aren’t trying hard enough. It’s that the strategies often just aren’t implementable and aren’t designed to win. Indeed, leaders frequently focus too much on screening the market for opportunities that look interesting and not enough on identifying those strategic opportunities their company is uniquely well positioned to pursue â€“ those that will give them a real market advantage,” said Dean Arnold, Partner at PwC, which participated in this research. Adds Paul Leinwand, Partner at Strategy&: “In order to close the strategy-execution gap that concerns almost all executives, companies need to be very clear about the few capabilities that will set them apart from their competitors and build a strategy on those strengths. Then, the most important success factor in executing the strategy is to engage everyone in developing or enhancing those capabilities providing focus and joint purpose.”

Furthermore executives are most concerned about it not being bold and coherent enough: 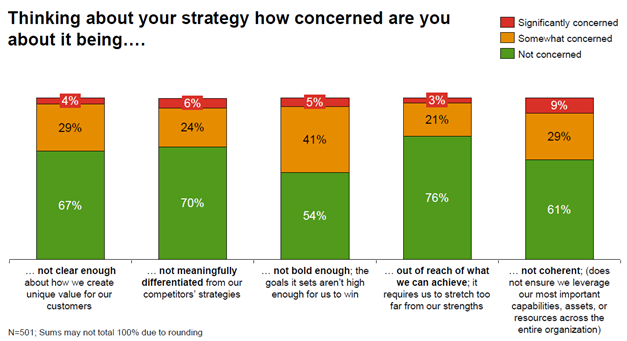 Executives recognize the importance that capabilities play for their companies’ success. Indeed, those who felt comfortable saying their company is “currently winning in the market” were most likely to say their success is attributable to “great leadership” or “powerful and distinctive capabilities.” (For examples of such capabilities think about Apple’s intuitive user interface design or Procter & Gamble’s technology-based innovation aimed at providing reasonably priced, life-enhancing products.): 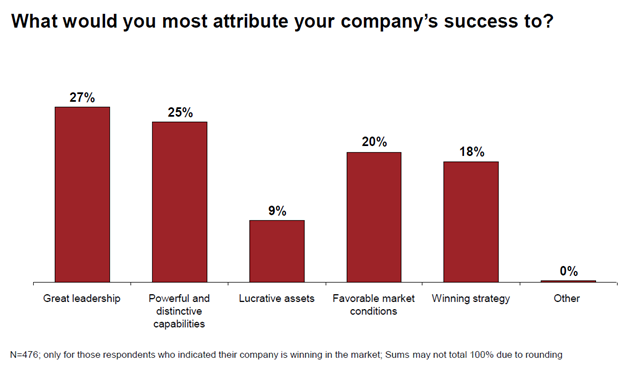 *Info: Strategy& is a formerly Booz & Company, now part of the PwC network.