A few days ago IÂ posted some interesting figures related to large government investment funds (sovereign wealth funds) and their cash flow sources. So what do these funds in detail in their investments? 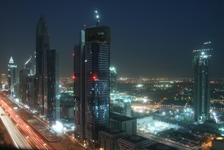 Well this matter is not directly related to strategic planning. However the current trends and financial investments of these funds should be considered carefully when planning, since they might represent a major external impact factor for certain organizations. These can include firms within the technology sector, high tech industry and financial business. So letâ€™s have a brief look at some recent activities of those funds that have their cash flows â€œgeneratedâ€ by commodities.

An interesting example is Dubai International Capital (DIC): In July 2007 the DIC announced that it has the objective to invest 10 billion USD in worldâ€™s top 500 companies.Â  DIC (founded in 2004) is part of the Dubai holding, which belongs to the monarch family. In the last couple of years DIC made investments in USA, Europe and Asia, often together with KKR and Carlyle. The total of all investments is said to be 12 billion USD.

In July 2007 the Dubai International Capital (DIC) made an acquisition of 3.12 % of EADS. Vehicle for this investment with a total of 600 million EUR was the GSEF fund. A very interesting issue: Emirates, the VAE airline, did place an order for 55 of 168 â€œairbus 380â€. Now a large buyer can â€œmotivateâ€ the organization more directly. DCI head Mr. Sameer al Ansari highlighted that he expect a robust economic cycle within the civil aviation.Â  Note: Two month before this, DIC acquired some shares of HSBC.

In November 2007 DIC announced a â€œsubstantial investmentâ€ in Sony. Until this date, DIC did not made investments in Japan.

Before this, DIC took over the German ALMATIS (the former chemistry business of the aluminum maker Alcoa. DIC also bought some stakes of the New York based hedge fund Och-Ziff Capital Management for 1.26 billion USD.

In the middle of November 2007 the Mubadala Development Company (based in Abu Dhabi) spend 622 million USD to buy a 8.1 % stake of AMD. Not a big deal in financial terms, but having this stake might be open up several doors for further investments.

But this is not the only player in the market. Today it was announced that Abu Dhabi Investment Authority (ADIA) acquires 4.9 % of Citigroup for 7.5 billion USD. According to Citigroup this ADIA cannot send representatives to the company boards; therefore this would be a passive investment.Â

So what can you take away for your strategic planning? Your competitor might be losing money, it might be under threat (orÂ even just weak) in financial termsâ€¦and next day an investment fund will change the rules of your game….since the new stakeholder is expectingÂ profits or at least a success storyÂ and will present this very clearly to the executives.