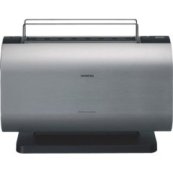 This is a toaster with a design made by Porsche. It’s sort of weird, but this device was object of a question during the Porsche’s Annual General Meeting, the world famous German sports car maker. A couple of days ago the Annual General Meeting of Porsche took place. It was a good example that understanding your stakeholders (in this case represented by shareholders) can be tricky. When discussing product development and environmental issues Mr. Wiedeking (CEO of Porsche) argued that the company would not employ ideology as an approach when developing cars; instead it would focus on the market.

However, some shareholders expressed their expectations concerning climate protection. In terms of cars they still saw options for further undertakings. But the most unexpected questions would have been this. A shareholder complained that his toaster (design by Porsche; you have to have in mind that there is a number of consumer products with a design made by Porsche in the market) only offers a stand by function (instead of a total turning off function). Hence the device would spend electricity all the time.

The CFO Mr. HÃ¤rter was smart enough not to discuss this remark in terms of its relevance for an Annual General Meeting or its contribution to protect the climate. I guess he had in mind that climate protection and carbon dioxide related topics have gained a high relevance in discussion; maybe he thought also that “every little helps”. He answered that the firm does not have a direct impact on the functions of those design products. However, the board of directors would consider this topic in one of its next meetings.