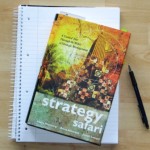 This yearâ€™s Thinkers50 ranking publication is getting closer. Besides that, they have already announced that Henry Mintzberg will receive the 2015 Lifetime Achievement Award. I think he is an excellent choice.

I have to admit that Henry Mintzberg is one of my favorite management and strategy writers. I first heard about him when I was recommended to read the Strategy Safari during my MBA at the beginning of the century. Since then, I like his well-thought writings that are almost entertaining to read due to his light humor.

I guess at that time, Mintzberg already was that successful that he could afford to write something beyond formal research papers and textbooks. Hence, he took the liberty to critique widely accepted concepts like strategic Planning

You can read more about his achievements in the official press release. One final thought I like to share with you is Mintzbergs comment on the Thinkers50 Hall of Fame on his blog:

â€œStuart and Des now run the prominent Thinkers50. Since 2001 it has been ranking these gurus of the management world. I used to be on that list, but eventually, with we older guys dropping down (the likes of Tom Peters, Warren Bennis, and Phil Kotler), they kicked a bunch of us upstairs, to their Management Hall of Fame, and thus no longer eligible to be ranked among these best.â€