well, before I start I have to explain thatÂ the term “second” here is equivalent to “another”. To be more specific, it is the bank’s second major strategic move to enter the lower retail banking market. One of German leading financial institutions, the Deutsche Bank, has started its associated company â€œNorisbankâ€ to enter the German market for low cost retail banking. With a focus on price competition, the Norisbank has the objective to increase the number of its customers three times to 1 million at the end of this decade. The bank will focus on customers who have to take care for their financial belongings (â€œpeople who take low cost airlines to go to Rom and then shop with Pradaâ€). The organization will gain new customers with just a few financial products; those products will be at least under the top 3 of their product range in terms of price competition.
Opposite to this the Deutsche Bank with their brand will still focus on the premium segment of banking services.

The Norisbank was a former specialist and product provider for personal loans within the DZ Bank; offering personal loans and lean loan processes to the credit cooperatives in Germany. It has been a subsidiary to a large number of other enterprises in the past. In 2006 the Deutsche Bank bought the Norisbank, leaving only the loan business within the credit cooperative sector.

This launch can be described as the second attempt of Deutsche Bank to set up aÂ new brand in the retail banking business. In the mid 90â€™s the Deutsche Bank started the â€œBank 24â€ with an innovative concept to enter the lower segment of the retail market. The following figure illustrates the development of this approach. 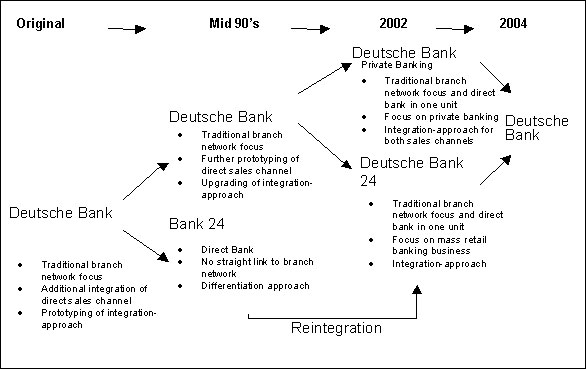 The former â€œBank 24â€ can be described as an innovative approach, using a new brand and offering a wide range of sophisticated online services in order to attract younger customers and customers with a focus on modern technology. It was a second brand, but it was not positioned that much as a low cost brand. The established recognition included terms like â€œmodern bankingâ€ and â€œtechnology driven bankingâ€. Customers who wanted to experience more traditional banking, kept with Deutsche Bank. Having a debit card of bank 24 had the meanings of being a modern bank customer.

Today the company describes itself as the â€œfirst quality discounterâ€ in the German retail banking.
But I donâ€™t think so. There is a large number of banks that targets the same market segment and offers comparable products and services. Furthermore, a variety of financial service providers from abroad have entered the German market in the last couple of years, too. It is possible to offer some extraordinary interest rates for some years and to employ a big wallet marketing approach when (such) a bank enters the market. But at the end of the day, retail banks income is still generated from net interest income and provisions. No retail bank was able to invent other return sources.
So, what is good and what is bad about the Norisbank approach?

There are some positive aspects:

But I see some negative aspects as well:

Having said this, I think that Norisbank will face major challenges. So far, a source for a competitive advantage can not be identified from outside. Furthermore it can be expected that both established branch banks and direct banks will defend their markets.